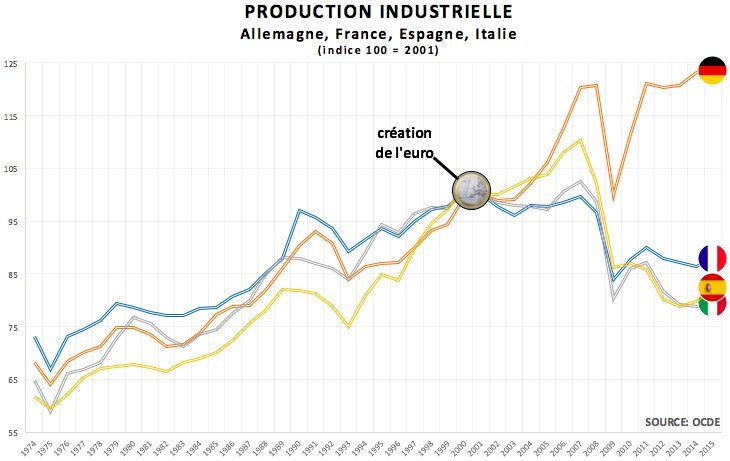 At the risk of being criticized, I want to deliver my culturally based analysis of the given economic chart: here’s a perfectly noticeable difference between Latin (France, Spain, Italy) and Germanic cultures. Until 2001 there is clearly visible parallel and relatively homogeneous industrial production—whatever the economic situation through the shown period of time since 1974. Many economic and political explanations could be given to argue this relatively homogeneous and sustainable industrial development, carried out with independent currencies.

But since 2001, when the Euro entered into use, Germany masterfully kept progressing compared to the Latin group of countries. Could it be argued with different cultural attitudes and behaviors of these two cultural groups?

In addition, the picture unwittingly recalls the known belief that globally the Southern cultures have a tendency to be “more lax” than the Northern ones. Indeed, this is a very generalizing and stereotyping analysis, which should not be ubiquitously applied. Even so, this tendency/difference is visible enough in other cultural differences ‘North-South’ all over the world. 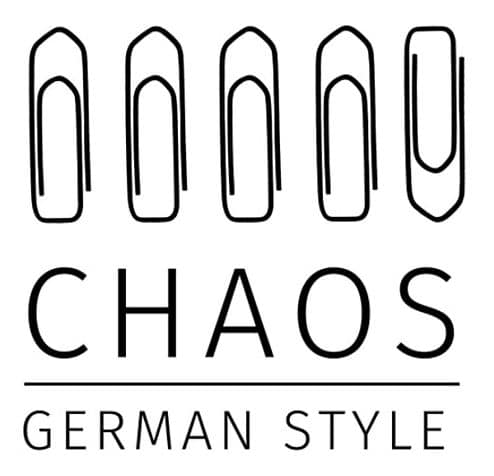 The “Chaos, German style” shows in a funny way a quite different approach of Germanic cultures (estimated at approximatively 30% of the EU population) from the Latin one (42%). Undoubtedly the Germans are known for their punctuality, order, effectiveness, task orientation, deadlines respect and penchant for the money saving at a state level. The same attitude may be naturally seen in Austria, Liechtenstein, Luxembourg and Switzerland (particularly their German-speaking part), as well as in the Dutch part of Europe. But those are not the first values of Latin cultures.

By extrapolation and to a lesser extent, Scandinavia (Denmark, Norway, Sweden), originally belonging to the same cultural group and, thus, having the same ethno-cultural heritage, may be identified with a similar cultural / economic behavior. By the way, in the modern-day geographical and cultural subdivision, Scandinavia is not to be confused with Nordic countries which comprise Finland and Iceland, in addition to the three mentioned.

Interestingly, English culture has also Germanic roots in its DNA. So to an extent the modern English culture societies all over the world are supposed to be unconsciously guided by a similar behaviorism, in accordance with the anthropological theory of cultural conditioning. 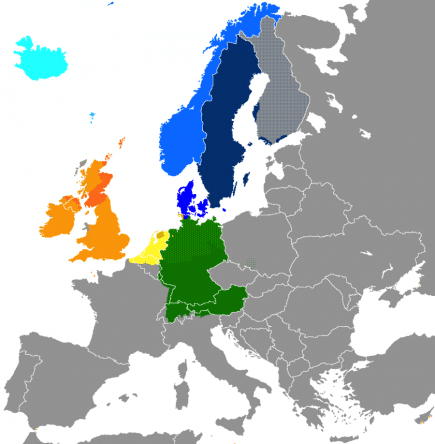 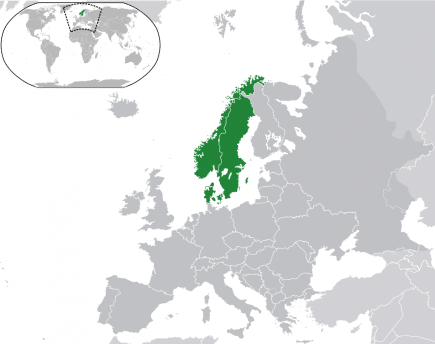 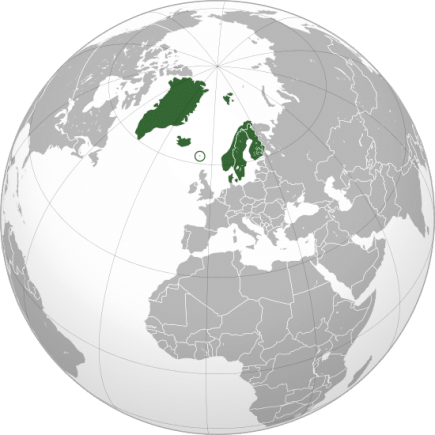 It is useful to notice that despite the historical division of Europe into linguistic groups, religions played a very important role in the influence of these 2 major cultural groups, without mentioning, of course, a multitude of other factors.

The Latin cultures, or Romance-speaking Europe, include mainly Catholic countries like France, Italy, Spain and Portugal (as well as those small principalities: San Marino, Vatican, Andorra and Monaco), and Orthodox ones like Romania and Moldova. To some extent Latin America (Central and South America) is considered like a sort of parallel to the European Latin group, thanks to its Neo-Latin languages spread in Central and South America. The small part of Canadian French-speaking provinces is not included in the Latin America. Thus South America has the same ethno-cultural heritage as Romance-speaking Europe.

And Germanic cultures are mainly composed of a Protestant ramification, evolved into Anglicanism (in England) and Lutheranism (representing at least ¾ in the Nordic countries). Even if today 30% of the German population are Roman Catholic (the South and West are predominantly Catholic), and only 29% are affiliated with Protestantism (the North and East are predominantly Protestant) — Germany was the source of Protestant reformers such as Martin Luther. Since XV-XVI centuries this contributed to the expansion of Protestantism among Germanic culture countries. 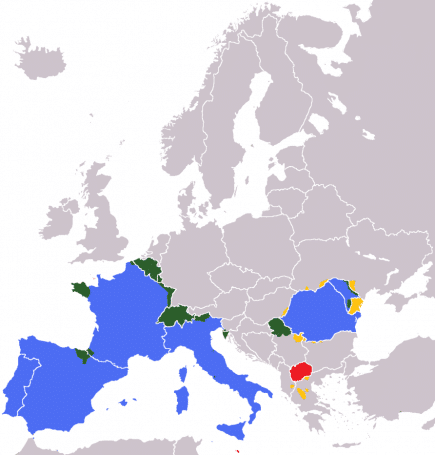 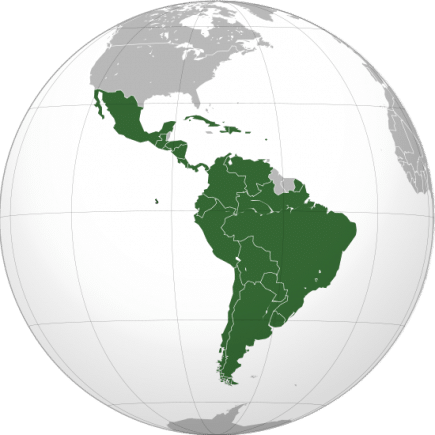 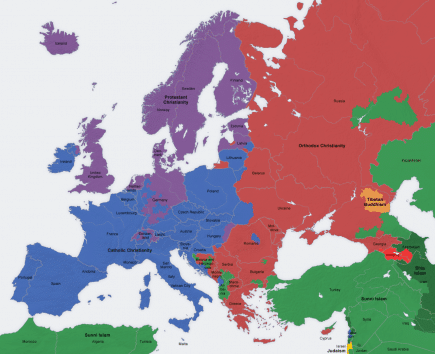 Incontestably, these religious movements played a very important role in people’s conditioning, as did the languages and other multiple parameters (climate conditions, historical events, cultural mixtures, wars, etc.). Thus, Europe gave birth to 3 major religious ramifications derived from Christianity: Catholicism, Protestantism and Orthodoxy. All evolved differently and left its print in the concerned cultures along our complex history.

As was said at the beginning, many economic and political explanations could be given to argue that homogeneous industrial development, carried out with independent currencies until 2001. In the same manner one can comment the curves’ cleavage since Euro entered into use:

The above arguments are not mine, this is what one can find on a everyday basis on TV, in newspapers and magazines providing innumerable experts analysis and opinions. But I see something different in this chart, particularly when I think about the well-known Germanic quality of all their products (German cars, Swiss watches and knifes, etc.), when I analyze organization, values and attitudes within Germanic cultures which are significantly different from the Latin ones. These differences and forces of the given cultural group make me presume that cultural attitude, which is guiding a group of people in all aspects of their life, rules their economic development whatever the political conjuncture and global economy are. Some cultures, taking into account their particularities, are keener to adapt to all economic situations—with or without common currency.

By the way, among the countries mentioned in initial chart, Germany has the lowest public debt (certainly due to their economical attitude), even if the German public debt is not the lowest in the EU. So, considering that fact and the aforementioned curves, it is not surprising that the Germans don’t want to pay for the Greek debts (the first public debt in the EU) as well as for the other countries in the European Latin group.

Therefore, it seems quite interesting to me how one can explain the nowadays economic indicators, as well as numerous political and geopolitical mechanisms, which still keep being influenced by our secular cultural programming. And the most interesting above all—this programming, conditioned by secular religious history, is still guiding the 21st century’s society known for its high edge sciences, which proved the Big Bang reality and is discovering the quantum physics…

I let everyone draw your own conclusion, bearing in mind that there is no best culture! 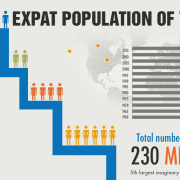 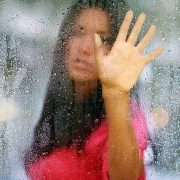 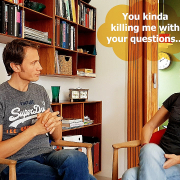 Tolerance For The Sake Of Multiculturalism? 🎙️ Myriam Callegarin 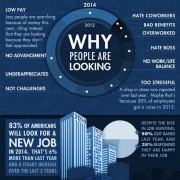 Why people are (always) looking for a new job?
Subscribe
0 Comments
Inline Feedbacks
View all comments
CAUTION
This site is not intended to proselytize or to promote an ideology or a current of thought. The ideas and issues developped here can be discussed, completed and reviewed.