“What would you like to be doing in 5 years?”

This is a simple question which, as a men’s coach, I occasionally ask my clients. It often meets with blank stares, nervous laughter, and sometimes even tears. This morning my client’s response was to sit silently for a moment and then pull out a copy of resignation email from a colleague. It was full of anger and wild accusations. It took me a moment to understand his indirect answer. “Vision” requires one to step out of the thinking mind and an into awareness of one’s dreams and desires which then opens the door to “emotion”. My client’s colleague’s email was evidence that emotions, at least the ones which so often erupt in corporate environments, are toxic ones. This is especially true in companies which place a high priority on performance. For my client, looking inward and openly acknowledging emotion seemed so entirely out of context. Despite the lip service paid to “emotional intelligence” many men have never been given permission to do this.

This is one of the many paradoxes of coaching: any progress in creating a vision for our lives or careers cannot occur without looking back to understand which cultural forces and filters formed our identities in the first place. 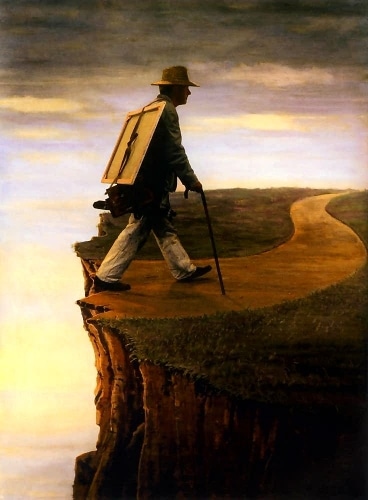 I’d like to share a story about growing up male in the 1970s in the Midwest. It is very personal, but I simply don’t care. Actually, it doesn’t matter because I know that the situation and the feelings expressed are universal. If any reader can begin to speak to himself (or herself) with a little more compassion, then it will be well worth the sacrifice.

I grew up in the US in the 1970s, the third son of four (no sisters). For some reason, I got called “the artist” in the family. I was “the sensitive one”, more interested in music and languages while my younger brother, Doug, excelled in sports. I never had any real interest or aptitude for sports, and I wasn’t going to “fake it” to please anyone. As a result, I resigned myself to the fact that my Dad connected more with my younger brother than with me.

We were a simple working-class family and lived modestly in a ranch style house in suburban Saint Louis. Dad made sacrifices to make sure we never went without anything. This meant traveling once or twice a month out of state to make sales calls. He’d be gone for 2 or 3 days at a time.

Whenever we heard his car pull into the driveway, both me and Doug would run out to help him unpack. Of course, we missed him, but we also knew that he would sometimes bring back some kind of “present” — comic books, a dartboard, a baseball glove or something that was generally of more interest to my younger brother than it was to me.

Except for once… I remember one Friday afternoon very clearly. I came out alone to help Dad unpack the car. As I reached into the bottom of a brown paper shopping bag, I found something wrapped in hard plastic.

“Just one? And just for me?”… Of course, I kept this thought to myself. As a 10-year-old boy, I was starting to learn that it was best not to express TOO much emotion about anything.

It was a pretty primitive horn : a rectangular metal box which held two “C” size batteries, a wire and a little plastic red button which, when pressed, gave off a clear warning to any absent-minded pedestrians on suburban sidewalks. I was delighted in the way that only a kid can be.

Anyone who tells you that deprogramming societal or parental expectations is quick or easy is being disingenuous at best…
I kept that bike for years, although it got relegated to the basement when I got my first driver’s license at 16. I don’t ever recall leaving it out in the rain but for some reason the handlebars on that bike picked up an awful lot of rust. Fifteen years later, while doing some serious house cleaning, I decided that it was high time for me to part ways with it. After dragging it upstairs, I took it out to the driveway for removal. I hit the kickstand to park it for one last time. As I turned to go, however, I got hit by a wave of nostalgia. The little kid in me wanted to press the rusty little red button on that horn one last time and to my astonishment, it worked! Even after years of lying dormant, the batteries somehow kept their charge. In fact, the horn sounded just as clear as the day Dad helped me put it on my bike.

Fast forward fifty years. My father passed away about 10 years ago. I never imagined how much I would miss him. Sons never used to say those kinds of things to their fathers. And I must admit, when I did speak to him, I did not always say the kindest of things. (I may have inherited some of my Dad’s penchant for sarcasm.) Still, I prefer to recall things we actually did together, like the games of golf on unbearably hot summer mornings in Forest Park.

There are winter memories too. The time when my battery of my Ford Torino died late night in a really dodgy neighborhood of the city. Dad drove out from the suburbs in subzero temperatures with jumper cables to restart the car. He never complained once about doing so.

The fact that I have lived abroad for more than half my life did not give me the opportunity to spend enough time with him. As Mom and Dad got older, I would spend an entire month back in Saint Louis, usually in the worst of the summer heat. I would always celebrate my birthday with them back home. We never did anything special. It was enough to play cards at the kitchen table or watch a Cardinals baseball game on the sofa. Over time, we learned to hug each other. Somehow, late in the 1980s, it became socially acceptable for men to do this in public places like airports without looking “queer”. Dad actually grew fonder of his “prodigal son”.

One thing I’ve learned as a coach is that we are all deeply influenced by our national culture, whether we consciously identify with it or not. Role models (what defines “masculinity” for example) go unquestioned and continue to influence us even as adults. In our pop media culture, icons are set on an altar and there is no point in pressing the “mute” button on the remote control.

All the latest research in neuroscience shows that for the first seven years of our lives, we all “download” what Jung called “archetypes”. Anyone who tells you that deprogramming societal or parental expectations is quick or easy is being disingenuous at best. Any progress towards self-acceptance cannot take place without pulling up the dandelion roots in the gardens of our lives.

Now, as an American, I’m an optimist by nature, but I also realize that finding peace and purpose calls for courage. In and outside the office, conscious efforts need to be made to create environments where men feel safe to express emotion in their lives.

In my opinion, getting clarity on one’s vision is tricky because it requires two conditions. Firstly, it forces one to look at the finite nature of our lives! This is inextricably tied to meaning. “How far have I strayed from original career or life goals and will I ever get back on track?” Secondly, looking into the future sometimes means holding a flashlight to what has hurt us in the past and making it conscious so that it no longer defines us.

“What do you see yourself doing in the next five years?” This is not an easy question, but an important one. Creating a vision for ourselves calls for true courage: the courage to be honest with ourselves and vulnerable with those we love. My Dad’s love for me endures and gives me that courage. In any case, whenever my heart starts to ache, somewhere in my memory I look for the plastic red button on that horn…

and I press it…

Reality of corporate meetings and of notion “expert” (video sketch)